Faster charging and other updates for the 2019 Volt

One of the big differences between gasoline and electric vehicles is the time they take to refuel. (Yes, recharging is a form of refueling.)

Filling a tank takes less than 5 minutes and provides a range of maybe 560 km. (Unless you’re stuck on the QEW on the way to Budds’.)

Recharging your EV? Much slower.

That’s why Chevrolet is introducing higher-speed charging on the 2019 Volt.

The Volt is a four-door, four-seat liftback that Chevy calls an extended range electric vehicle.

That’s because it’s an electric vehicle (EV) with a small engine onboard to generate electricity.

This eliminates those “range anxiety” fears that plague other EVs. Under certain circumstances though, the engine also sends power to the wheels. That’s what makes the Volt, technically speaking, a hybrid.

In addition, you can plug the Volt into an electrical supply and recharge the battery that way. This makes it a plug-in hybrid. Clever.

The Volt launched late in 2010, followed by a second generation in 2016. Over time the Volt has gained a larger battery pack—which means greater electric range. Trouble is, though, a bigger battery takes longer to charge.

If you want to fill a bucket faster, you open the faucet more. It’s the same thing with “filling” the battery in an EV – you need more electricity to flow.

The 2018 Chevy Volt has an 18.4 kWh capacity battery. Plugged into a 120V household supply it takes as many as 13 hours to “fill.” To speed this up the Volt can also be charged at 240V. That’s the voltage most electric ranges use. At 240V, charging time is around 4.5 hours.

For 2019 Chevy has upped the ante considerably. The new Volt will come with what the engineers call “Level 2” charging. It’s still a 240V system, but uses advanced electronics and software to “fill” the Volt battery in 2.3 hours. (Be aware though, if you want this high-speed charging you’ll need to either step up the Premier trim, or select it as an option at the LT trim level.) 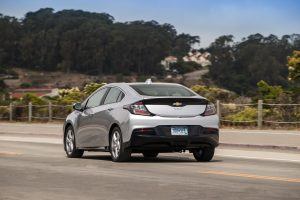 Running on electric power alone the Volt achieves 2.2 Le/100km. (“Le” is “liters equivalent.” That’s the same amount of energy as you’ll get from a liter of gas.) The combined figure comes out to 5.6 L/100km, based on a mixture of electric-only and gasoline engine fuel efficiency.

For most EV owners range is a bigger concern than efficiency. The 2018 Volt will go up to 85 km on pure electric power, and can travel as far as 676 km on a full tank of gas and a full charge.

If you’ve never driven an EV you could be in for a surprise. Whereas most fuel-efficient cars are a little snooze-worthy in terms of driving fun, the Volt delivers remarkably brisk acceleration.

That’s because the electric motors deliver maximum torque at very low speed. As a result, you can sprint away from traffic lights, and yes, you can chirp the tires. (If that’s your thing.)

The other point to note is the softness of the ride. The suspension in the Volt is set up to give a very smooth comfortable ride. That makes it a great long-distance cruiser as well as an about town runabout.

And those other updates?

For 2019 Premier trim gains a six-way power driver’s seat, while all models get the Chevrolet Infotainment 3 system on an 8” (200mm) touchscreen.

In addition, the regenerative braking system sees some changes. These let you manage how much energy goes back into the battery while slowing down.

And last, there’s a new paint color and new patterns for the seat upholstery.

The future of the automobile?

Incredibly innovative when it first appeared, the Chevy Volt is still the benchmark for plug-in hybrid cars. But we could tell you about the Volt all day—the best way to learn more is by taking a look and actually driving one. Call us at Budds’ Chevrolet Cadillac Buick GMC to set up an appointment.