Buy a 2018 Cadillac XTS or a Chevrolet Impala and Ontario benefits.

That’s because both these well-regarded vehicles are assembled at the Oshawa GM plant just 100km down the QEW from Budds’ in Oakville.

That’s important to us—and we hope it is to you, too—because when you buy one of these vehicles your money helps pay the wages of the people working there.

Let’s be honest though—it’s not like buying one of these Oshawa-made cars is a sacrifice. We’re lucky enough to have on our doorstep a factory that builds really good vehicles.

Here’s a little more about it.

A history of car manufacturing in Oshawa

Oshawa was building Chevys long before General Motors acquired the Chevrolet company in 1918. Over time other brands were added to the mix, and in 1953 the existing Assembly Plant was opened. Today it occupies 5 million square feet, which includes two assembly lines and a paint facility. Employment has gone up and down with the economy and car sales, but currently, there are some 2,600 full-time GM workers on site.

The Oshawa plant has built every North American brand of GM car except for GMC. Back in the 1960’s production included the Chevy Impala, the Pontiac Strato Chief, and the Pontiac Laurentian. (If you’re not old enough to remember those Pontiacs, they were large coupes, sedans, and convertibles with similarities to the US-built Chevy Bel Air and Pontiac Catalina.)

The 1970’s saw Oshawa building models like the Chevrolet Biscayne and the Caprice Classic, along with that staple of the GM line, the Impala.

Move forward to the ’80’s and yes, Oshawa was still building Impalas, supplemented by the likes of the Buick Century and the Pontiac 6000.

Things changed in the 1990’s when Oshawa took a break from Impala production, although that resumed in 2000, continuing until another break in 2016. Also coming off the lines during those years were the Chevrolet Monte Carlo, the Lumina and still the Buick Century.

Coming more up to date, in 2009 Oshawa started building the 5th generation Camaro. That was followed in 2010 by the Equinox, joined in 2013 by the Cadillac XTS sedan.

You don’t get to be over a century old without racking up some milestones.

Here are some of the more recent, taken from the plant website: 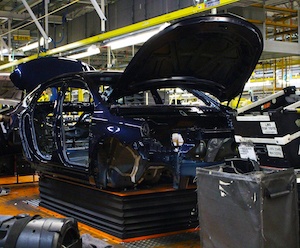 Now, just because the last of X or Y model has rolled off the line doesn’t mean the plant is running down. That couldn’t be further from the truth. Oshawa has a top-notch reputation in the auto industry for both productivity and quality.

In fact, Oshawa has won 29 J.D. Power Quality awards, making it the most decorated facility in North America.

Let’s put that another way: if you buy a car that was built in Oshawa you can be confident of receiving an exceptionally well-made product.

As you’re probably aware, the Equinox is still very much alive. Indeed, the new 2018 model debuted to rave reviews, but it’s no longer assembled in Oshawa.

Instead, GM is investing over $300 million to turn that line over to truck production. Industry sources say starting very soon we should expect to see Chevy Silverados and GMC Sierras coming out of Oshawa at a rate of 60,000 a year.

Keeping your money in Ontario

It’s good to support local jobs and businesses, but it shouldn’t cost you to do so. When you buy a GM vehicle that was built right here in Ontario you’re helping fellow Ontarians, but it’s not a selfless sacrifice.

Whether you’re getting a new Impala or a Cadillac XTS you know it’s going to be a well-rounded vehicle that won’t let you down. And if a used Equinox, Camaro or Buick Regal is more in your price range—you can have complete faith in the workmanship that went into those cars, too.

You could argue that being able to buy these locally-built vehicles is a privilege. And if you don’t believe us, come down to Budds’ Chevrolet Cadillac Buick GMC and see for yourself.