The Chevrolet Equinox has been in production since 2004, but the latest 2018 model has undergone some big changes.

The biggest? The 2018 Equinox, the first model of its third generation, is now classified as a compact crossover SUV—and it’s completely redesigned from previous Equinox models.

The redesign isn’t so much a matter of reinventing the Equinox. After all, in 2016 the Equinox sold better than any other vehicle in the entire General Motors lineup aside from the Silverado pickup truck.

But it still lagged a bit behind the pack when it came to competing models. That meant a redesign was in order for the 2018 model year—and the new Equinox doesn’t disappoint.

Here’s a closer look at the new 2018 Chevy Equinox.

For comparison’s sake, the previous generation of Equinox vehicles was equipped with 2.4-liter and 3.6-liter engines which did not carry over into the third generation.

Though the engines are downsized compared to previous models, power certainly isn’t.

And another big gain that the 2018 Equinox offers when it comes to these smaller engines is fuel economy. In fact, an Equinox equipped with the standard 1.5-liter turbocharged engine is able to achieve 11 km/L (26mpg) in the city and 13.6 km/L (32 mpg) on the highway.

What’s more, Equinoxes equipped with the 1.6-liter turbodiesel can hit nearly 17.7 km/L (40 mpg) on the highway.

In addition to ample headroom and legroom for both front and rear vehicle occupants, drivers are able to fold down the back seats to maximize interior space with the simple flip of a lever on select models.

Specifically, the trunk space is nearly 30 cubic feet (0.849 cubic meters), and this number more than doubles to 63.5 cubic feet (1.798 cubic meters) when the rear seats are folded down. That means tons of space for hockey bags, golf clubs, luggage and more. 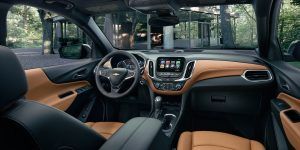 The 2018 Equinox is also packed with a variety of advanced safety features and other technology. In fact, it’s offered with up to 10 available active safety features, including forward collision alert, lane keep assist, low speed automatic braking, lane change alert and blind spot zone alert, among others.

One particularly interesting feature is the safety alert seat, which replaces audible safety alerts with various different vibrations in the driver’s seat.

Parents will love the Teen Driver technology available with the 2018 model, which essentially allows lets you analyze how your young drivers are performing on the road; in-vehicle reports can be used as a teaching tool. Teen Driver also won’t allow any front-seat audio until all passengers in the vehicle are buckled, and permits parents to set speed limit, audio and distance limits for their young drivers.

The 2018 Equinox is available in several different trims. The base model, or L, offers the best price, but it’s important to note that this is a custom-order model, so you’ll likely be waiting for it to be built and won’t be able to drive it off the lot in the same day.

The LS is the next step up and should be available on dealer lots. Then there’s the LT, which comes with more standard features. If you want the top line Equinox, choose the Premier model, which is leather trimmed and comes with all of the features that we’ve noted in this post.

In a nutshell, the Equinox might have downsized from a lengthened compact crossover SUV to a compact SUV for its 2018 model year, but it still offers everything that drivers love about the Equinox in terms of space, cargo and technology.

Contact us today at Budds’ to schedule your test drive.