All About the 2018 GMC Canyon Denali 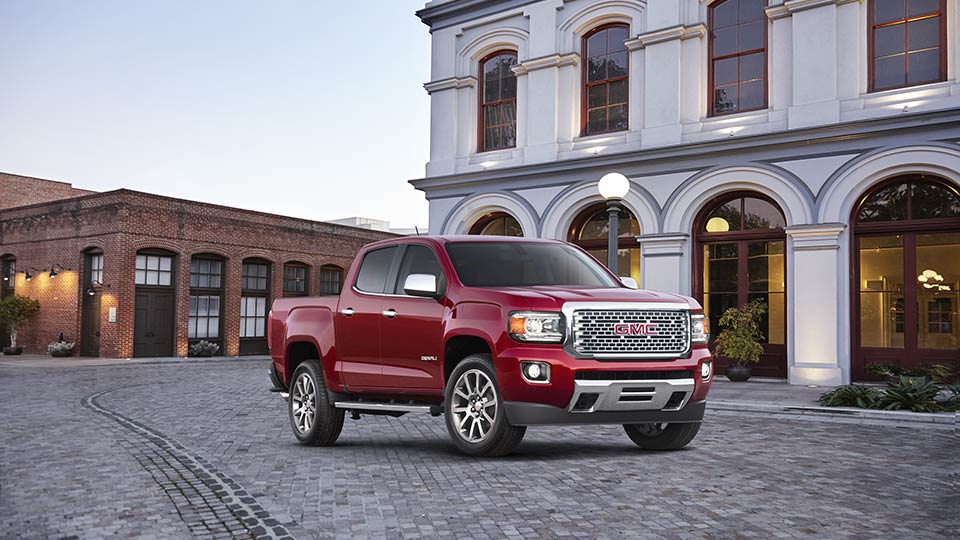 Are you a fan of the 2018 GMC Canyon Denali? Of course you are—because if you love GMC, you love Denali. It’s that simple.

Because ever since 1999, the Denali nameplate has been used to mean one thing: “top-of-the-line.”

Though the original Denali nameplate originally graced the 1999 GMC Yukon, it has since moved on to a wide range of other vehicles, including the GMC Canyon—which we’ll take a closer look at today.

But before we get into the basics of the 2018 Canyon Denali, it’s important to know just what the nameplate stands for.

Essentially, Denali is a one-word answer to the question “What are the best of the best GMC vehicles?”-of-the-line status among GM’s most prestigious vehicles. The Denali nameplate signifies a premium trim option—which means that although Denali models carry higher MSRPs, they also pack more features, technology, power, and quality into each vehicle. (And aside from the nameplate, Denali vehicles all share certain similarities, such as the distinctive front grille.)

Denali models have sold very well for GMC since their initial inception, and all with relatively little marketing or advertising.

Which brings us to the Canyon Denali, a mid-size pickup that’s been offered as a Denali trim since 2017.

The 2018 model builds on the Denali tradition, which you can see by simply taking a walk around the vehicle.

But just like it is with most vehicles, it’s the exterior that will catch your attention—and the rest that will truly hook you.

The 2018 Canyon Denali comes with a choice of two engines: a 2.8-liter four-cylinder Duramax turbodiesel and a 3.6-liter, V6. The former generates up to 181 horsepower with abundant torque, and is paired with a six-speed automatic transmission. It offers a maximum towing capacity of nearly 3,500 kilograms, and is even able to run on biodiesel fuel. One interesting feature is the exhaust brake, a first-of-its-kind in this segment, that relies on engine compression to bring the truck to a stop, thereby cutting down on the need for conventional braking.

The other engine, the 3.6-liter V6, generates up to 308 horsepower and pairs with an eight-speed automatic transmission. It has a maximum towing capacity of about 3,200kg.

Features such as inlaid doors, triple-door seals, and sound deadeners make for an incredibly quiet ride. The front seats are leather, and heated and ventilated. The steering wheel is heated, too.

The bottom line is that the 2018 GMC Canyon Denali’s interior isn’t just high on comfort; its attention to detail and craftsmanship is unmatched by many other vehicles on the market.

The Canyon Denali isn’t light on technology inside the cab, either. Yes, it’s full of features you’ve come to expect these days, such as a rear vision camera, and power doors and windows.

But it also offers some nice touches you might not have expected. One is a wireless charging station, which is able to conveniently and efficiently charge compatible devices. Also available is a 4G Wi-Fi hotspot to keep drivers and passengers connected wherever the road takes them. That hotspot is able to connect up to seven devices at a time—more than enough for everyone in the truck.

The Canyon Denali comes standard in two different styles. There’s the crew cab with a short box, as well as a long box model.

The short box version offers a length of nearly 1.5 metres, and a width about 110 centimetres. while the long box pushes close to 2m long and 1.5m wide. If that isn’t the most space in its class, it’s certainly up there—this is a surprisingly spacious mid-size truck.

Ready to haul yourself in for a GMC Canyon Denali?

Denali means exceptional quality and craftsmanship, and the 2018 GMC Canyon Denali is no exception to the norm. With powerful diesel and gasoline engine options, a bold exterior, and an impressive interior, this truck continues the Denali tradition in exciting ways.

To see for yourself or schedule your test drive, come and visit us at Budds’.