GM in the news: September

Well, dear readers, Fall is nearly upon us—which means it’s time for another Budds’ news round-up. Here’s what Chevy, Cadillac, Buick, and GMC have been up to lately.

Ever heard of autocrossing?

This from Ars Technica:

“A course is laid out upon a suitably sized piece of tarmac: tight and demanding turns mapped out in little orange cones. Any straights are short enough to keep top speeds low, but the throttle is still pinned to the floor as often as possible. Your time starts when you pass the first timing light and finishes when you reach the second. Shortest time wins, but you have to complete the entire course without hitting any of the cones.”

Sounds like a blast. And, as it turns out, it is—especially with a Chevy Bolt.

Here’s a deep review of the 2017 Envision, from the Halifax ChronicleHerald, of all places.

Spoiler alert: they call the Envision “well thought-out” and “pleasantly refined,” among other things.

But it’s not just a review—the article also contains some interesting introductory information on Buick’s success in China. Worth a read here.

Calling this Escalade “lifted” is like calling Arnold Schwarzenegger “physically fit”—there’s got to be a better word.

But that’s beside the point—there’s no arguing with this SUV’s authority:

“What appears to a National Guard LMTV (Light Medium Tactical Vehicle) got stuck in a low spot next to a flooded apartment complex on Wednesday, and the Escalade was in the right spot to lend a helping hand. Chances are the stock V-8 engine has been boosted or swapped out entirely for something more suited to hauling that heavy frame and turning those massive wheels, but still, it’s impressive to watch the Caddy haul out a 10-ton truck with ease.”

See for yourself at The Drive.

Towing a boat with the 2017 Cadillac Escalade: 6 things you need to know

From one tow to another—this time it’s an Escalade towing a boat (and a large-ish one at that.)

The Car Connection says it best:

“While most of the Escalade’s rivals feature car-like unibody construction for improved on-road dynamics and more interior space, underneath the hulking Escalade sits a beefy, pickup-derived frame that makes it a not-too-distant cousin to the Chevrolet Silverado. That makes for tighter interior room than its ZIP code-filling proportions might suggest, but it’s weekend-rated with optional four-wheel drive and up to 8,300 pounds of trailer-tugging capability.”

So if you’ve been thinking about a new luxury drive for next summer but you’ve been holding on the Escalade because… well, because “you just can’t do that”—maybe you can.

Car and Driver took the ZL1 for a spin and they loved it. They were afraid of it, make no mistake. But boy, did they love it:

“Lion tamers. That’s what we felt like after working the 3853-pound 650-hp Camaro ZL1 1LE to a 2:45.7 lap. The 1LE is a modified ZL1 designed for track use. It comes with spool-valve dampers in aluminum housings, steamroller Goodyear Eagle F1 Supercar 3R rubber, a wider mouth to better feed its 11 heat exchangers, dive planes that intimidate like face tattoos, and a carbon-fiber TV tray mounted to the trunklid. You need those parts. They’re the chair and whip necessary to keep this lion from eating you.”

Have a quick read—and make sure to check out the video—on the Car and Driver site. 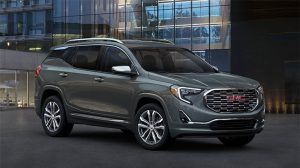 Forbes loves the Terrain. That is all. J

They say your first time is special—and yes, before you raise an eyebrow, we’re talking about the first time you buy a car.

Here’s James Spangler remembering his first, a 1955 Buick Special—a hulking boat of a car from a time when men were men and automobile names were actual English words:

“I paid the staggering sum of $800 for the car. I thought it was a steal, Dad thought I’d been had and, as it turned out, we were both about half right.”

Read and, perhaps, reminisce about your own first car, on Milwaukee radio station WUWM’s website. (As long as that car wasn’t a Chevy Citation.)

In a high-tech world, car designers still rely on clay

Finally, here’s a fascinating article on the art of designing cars—a process that requires prototype after prototype.

But why do they make those prototypes in clay?

“Car companies have tried other materials, like plaster. They’ve tried designing cars on computers. But without the hand-sculpting process, designs tend to look stiff and stale, said Bob Boniface, the design director for global Buick exteriors at General Motors Co.

“Clay is still the best. It’s a very flexible medium,” Boniface said. “We can put the clay on and take it off very quickly.”

Make your own news at Budds’

If that appeals to you, let us know, newsmaker.