At Budds’, we’re always excited when our favourite brands make the news. And sometimes we get so excited we like to tell you about it.

It’s been a busy couple of weeks for GM brands, so that means it’s time for another news round-up. 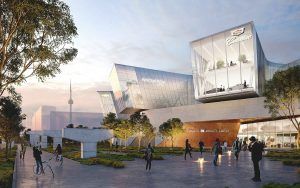 Canadian AutoWorld reports via AutoGuide.com that GM has more in store for Toronto than was originally thought.

In case you missed it, last year GM Canada purchased land on the lakeshore in east Toronto and announced plans for new offices, a multi-brand dealership and a research and development mobility campus.

Turns out there’s a lot brewing on the waterfront. Read more here.

New Cadillac infotainment system will debut in the Cadillac CTS

Changes are coming to the CTS—some colours are going away, for example, and Satin Steel Metallic makes its debut.

But it’s the new infotainment system that has the geeks in us excited. GM Authority touts “a completely redesigned user experience and new features like driver profiles, an all-new navigation app, and a summary screen.” Read more.

Ward’s has announced its 10 Best Interiors and some are surprised to see the Buick Lacrosse on the list. Not us—we’ve known it was a beauty since the first one rolled onto our lot.

Ward’s says Buick has “genuinely remade itself into a contemporary premium brand worthy of a closer look from import-leaning buyers.” One of the judges remarked “there’s a stylish element to this Buick that I’ve never seen before in my lifetime.”

You can read more about the Lacrosse interior at wardsauto.com.

“Contrary to popular belief,” says AutoGuide.com, you don’t have to spend a ton of money to get behind the wheel of a luxury car.”

To make their point they present a list of 10 luxury cars under $US35k—about $45,000 Canadian dollars.

We’re proud to say there are two of our favourite cars on that list: the Buick Encore and the Cadillac ATS. (Plus, they were sad to say the LaCrosse didn’t make the list only because leather seats would have pushed the list price over 35,000.)

Read the full list—although to be honest, we were done at the Encore and the ATS — here on AutoGuide. 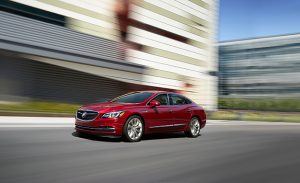 Speaking of the LaCrosse, Autoblog has the details on the new 2018 model:

“Like the previous generation LaCrosse and Regal eAssist models, this one features a small electric motor and an equally small battery pack that together augment rather than supplant the gasoline engine. The motor, attached to a 2.5-litre four-cylinder engine, helps to make takeoffs smoother and provide additional torque on demand. The gasoline engine still does the majority of the work, though. Combined, the powertrain produces 194 horsepower and 187 pound-feet of torque. It will also allow the LaCrosse to get 9.4L/100km in the city, and 6.7L/100km on the highway.”

Read more about the 2018 Buick LaCrosse.

Motor Authority has spy shots of the 2019 CTS. The new design appears to borrow from Cadillac’s Escala concept, and rumour has it that both SuperCruise and the new CUE will make an appearance. See for yourself.

A new generation of Chevy Bolt EV has been mass produced

“The updated sensor array includes Lidar, cameras, other sensors, and additional hardware that is designed, GM says, ‘to accelerate development of a safe and reliable fully autonomous vehicle.’”

We’re still going to have to wait a while to buy a fully automated car—experts predict 2030—but we can’t deny it… The fact that we’ll see them in our lifetime is pretty cool.

Just in time for Father’s Day, GMC has rolled out a “Dad Like a Pro” ad to reinforce its “We Are Professional Grade” campaign.

The short version: to the tune of Barry Louis Polisar’s “Me and You,” architect Dad does as much as he can in the mornings with his son. Unfortunately he has to leave the kid alone as he heads off to work in his GMC Sierra. But never fear—he comes back at the end of the day with a surprise. (Wait, what are we experiencing? No, we’re not crying; it’s just raining in our eyes.)

Have a look for yourself. Sniff.

We’d love to see you ‘round up in these parts (we know… Terrible.) If you’ve been itching to get into a new Chev, Buick, Cadillac or GMC, come on by.